Aviation is part of a strong European and global economy, with the aeroplane providing a fast and convenient mode of transport. The number of passengers transported by aircraft has more than doubled between 2005 and 2019  and, after recovery from COVID, has a prospect of growth by a factor of 5 towards 2050. However, the sector in 2019 already accounted for approximately 2% of global carbon emissions. And aviation is the sole emitter of other non-CO2 emissions in higher atmospheric layers, leading to roughly 5% of today’s human-induced radiative forcing. These emissions, such as carbon dioxide (CO2), water vapor (H2O), nitrogen oxides (NOx), soot and sulphate aerosols, have a net warming effect on the earth’s atmosphere by increasing the concentration of atmospheric Greenhouse gases and trigger the formation of contrails and cirrus clouds.

This prospect of growth indicates that aviation’s share of the entire anthropogenic climate impact will increase exponentially in the coming years. To reduce this impact, intergovernmental and scientific institutions, as well as the aviation industry, are seeking greener aviation technologies and operational improvements (OIs).

Current policies (CORSIA, EU-ETS) and aspirations (EU, ICAO) to control aviation emissions are limited to CO2 effects only. If non-CO2 effects are included in the overall picture, European experts have concluded that the current aviation climate targets and policies are insufficient to reverse climate impact.

To set goals to further battle climate change the EC has set up a conglomerate of projects that addresses various aspects of greening the aviation sector. The EU-funded ClimOP project addresses both the non-CO2 and CO2 impacts simultaneously and focuses on shorter-term climate-friendly aircraft operations that specifically mitigate the climate impacts. 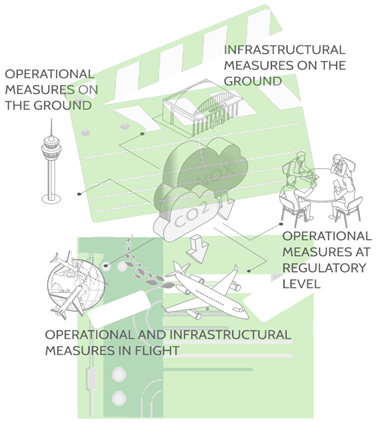 Operations consider the current fleet and today’s aircraft technology standards. Within ClimOP, the most promising and integrated mitigation strategies, aiming to support a greener aviation and mitigating the aviation climate impact, will be inventoried, evaluated, developed in more detail and proposed to aviation stakeholders and policymakers.

One of the project key challenges is that OIs have been studied for a long time in the academic world but some struggle to become adopted by the aviation sector. Adopting new kinds of operations often requires multiple stakeholders to simultaneously prepare and align their infrastructure, information flows, responsibilities and procedures. Examples are the (electric) energy supply chain to allow for electric taxiing,  communications and monitoring facilities for climate-friendly and free flight, and airport and air airspace capacities for intermediate stop operations. Introduction and maintaining OIs will need to keep safety standards and assuring smooth and continuous traffic flows. The introduction of OIs also comes with investments in the new and early retirement of older infrastructure and equipment. From a regulatory perspective, stakeholders need to change roles and accept new or relinquish existing responsibilities.

The Royal NLR is the ClimOP member responsible to help the implementation of climate-friendly aircraft operations by identifying actions and policies to support and facilitate the transition. It may be necessary to implement some OIs simultaneously. Varying policies that are associated with these OIs need to be harmonized and put together in a strategy to achieve optimal results. Policies should also consider the changing roles of individual stakeholders, the “pains and gains” in the process and the “sticks and carrots” to foster changes.

To identify candidate policies, ClimOP develops storylines that describe the interplay of various stakeholders in the current state of business, in the new fully developed state with OIs fully operational, as well as in the transitional period where some stakeholders adopted early, while others are still busy preparing. In this process it is likely that airlines need to re-equip aircraft with additional sensors and communications equipment, ATM organizations need to set up additional communication lines (e.g. enabling contrail sensitive area avoidance), and airports need to modify (landside) energy supply infrastructure (for electric taxiing) or increase airside capacity (for intermediate stop-overs). Alongside, regulatory aspects such as protocols and responsibilities need consideration.

These policies should aim to help mitigate the pains such as investment costs while promoting the gains such as climate impact reduction and possibly fuel burn savings. Simultaneously, its is relevant to avoid competition distortion. The ClimOP project is looking for effective policies to encourage stakeholders to adopt the OIs quickly and easily, helping speed up the transition. The most promising sets of policies resulting from this study could provide policymakers guidance on actions for new regulations and strategies to combat aviation climate impact beyond CO2.

Any cookies that may not be particularly necessary for the website to function and is used specifically to collect user personal data via analytics, ads, other embedded contents are termed as non-necessary cookies. It is mandatory to procure user consent prior to running these cookies on your website.